We're sorting out the flat at the moment, boxing things up and moving them around so new flooring can be put in.
During the tumult, I found the June 1999 copy of SLEAZENATION magazine - one of those postmodern, Hoxton-based London rags that Charlie Brooker ended up satirising with Nathan Barley. My friend Jenny was assistant editor at the time, and earlier that year, she called up and asked if I'd like to go along to the ICA and interview Robert Crumb. As you can imagine, I jumped at the chance. He was in London promoting his part of the 'EMI Songbook Series' - compilation CDs put together by various 'left-field' artists. Also at the ICA, I met Gilbert Shelton and Ralph Steadman - both of who drew a picture in my notebook (Steadman drew Nixon, Shelton drew Fat Freddy's Cat and waxed lyrical about how beautiful London's architecture was). It still galls me that I lost the notebook later that night, my 24 year-old brain fried by all the free tequila on offer.

Anyway - Below is the piece as it appeared. Of course there are a few mistakes here and there (Crumb never submitted 'Fritz the Cat' to MAD, for example) but I think it's fair to chalk half of those up to the judicious sub-editor, and the other half to me (not the dig at comic shops at the end, mind, that was them). Fans won't find anything new in it, I'm afraid. I've a cassette recording of the whole interview somewhere, which is leagues longer and more involved. If I ever find it, I may subject you to a transcript. (Edit - now here)

A quick note about the photos; they were a bit of a scoop, as Crumb had been interviewed by the Times a month or so earlier, reporting that Crumb wouldn't allow his picture to be taken. So, imagine our delight when he agreed to be snapped (by Ewen Spencer, who went on to photograph album covers for the Streets, the White Stripes and others). 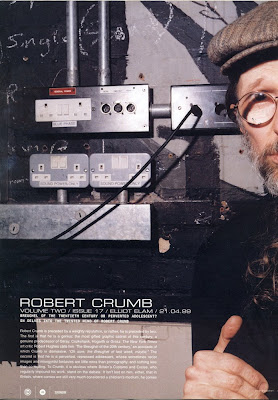 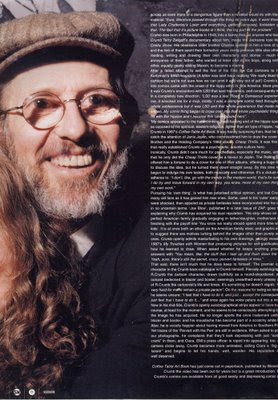 The first is that he is a genius; the most gifted graphic satirist of this century, a genuine predecessor of Gilray, Cruikshank or Grosz. The New York Times art critic Robert Hughes calls him 'The Breughel of the 20th century' (an accolade of which Crumb is dismissive - 'Oh sure, the Breughel of last week, maybe'.

The second is that he is a perverted, repressed adolescent, whose sometimes racist images and misogynist fantasies are little more than pornography, and nothing less than corrupting.

To Crumb, it is obvious where Britain's Customs and Excise, who regularly impound his work, stand on the debate. It isn't lost on him either that in Britain, where comics are still very much considered a children's medium, he comes across as even more of a dangerous figure than a novelist would with the same material; 'Sure. Literature passed through this thing 50 years ago. It went through all that Lady Chatterley's Lover and everything, getting censored, forbidden and all that. The fact that it's picture books is, I think, a big part of the problem'.

Crumb was born in Philadelphia in 1943, into a family that - as anyone who has seen Crumb, Terry Zwigoff's documentary about him will attest - made the Jacksons look like the Cosby Show. His obsessive older brother Charles instilled in him a love of comics and the two of them spent their formative years doing little else other than reading, writing and drawing their own characters and stories (much to the annoyance of their father. He wanted at least one of his boys, along with their equally geeky sibling Maxon, to become a Marine).

After a failed attempt to sell the first of his Fritz the Cat cartoons to Harvey Kurtzman's MAD magazine (A letter was sent back reading 'We really liked the cat cartoon but we're not sure how we can print it and stay out of jail') Crumb's break into comics came with the onset of the hippy ethic in 60's America. More precisely, it was Crumb's encounters with LSD that sent his comics (and consequently his life) in a completely new direction; 'LSD was a real Road To Damascus for me. It knocked me for a loop, totally. I was a complete comic nerd throughout my whole adolescence but it was LSD and that whole experience that made me well known. My comic thing began to cross over into the psychedelic thing and it hit with the hippies - and I became this underground hero'.

'My comics appealed to the hard-drinking, hard-fucking end of the hippie spectrum, as opposed to the spiritual, eastern-religious, lighter than air type of hippie' recalled Crumb in 1997's Coffee-Table Art Book. It was hardly surprising then, that he should catch the attention of Janis Joplin, who commissioned him to draw the cover to Big Brother and the Holding Company's 1968 album, Cheap Thrills. It was this cover that really established Crumb as a psychedelic, counter-culture hero.

Ironically, Crumb didn't care much for psychedelia, especially the music, admitting that he only did the Cheap Thrills cover as a favour to Joplin. The Rolling Stones offered him a fortune to do a cover for them, but he turned them down. By this time he had begun to indulge his own tastes, both musically and otherwise. It's a dictum he sticks to: 'I don't, like, go with the trends in the modern world, that's for sure. But I do try and move forward in my own way, you know, more of my own thing, with my own work'.

Pursuing his 'own thing' is what has polarised critical opinion, and lost Crumb as many old fans as it has gained him new ones. Some, used to his 'cuter' early work were shocked, then appalled, as private fantasies were incorporated into his comics. 'Joe Blow', published in a later issue of ZAP, shows a perfect American family gradually engaging in incest, finishing with the payoff line 'you know, we really should spend more time with the kids'. It's at once an attack on the American family ideal, and graphic enough to suggest there are motives lurking behind the images other than purely satirical ones. Crumb openly admits masturbating to his own drawings, jokingly revealing in 1987's My Trouble With Women that producing pictures for self-gratification was how he learned to draw. When asked if he keeps anything private today, he answers with 'You mean, like, the stuff that I tear up and flush down the toilet? Yeah, sure, there's still the secret, crazy pervert fantasies of mine'.

That said, there isn't much that he does keep to himself. The premier cartoon character in the Crumb back catalogue is Crumb himself. Fiercely autobiographical, R. Crumb the character (drawn truthfully as a round-shouldered myopic outcast, bedecked in blazer and boater) seemingly unearthed every uneasy aspect of R. Crumb the cartoonist's life and times. On the reasons for being so revealing, he seems unsure; 'I feel that I have to do it, and just... Accept the consequences. I just feel that I have to do it....' Both his voice and explanations peter out into a mumble.

Now in his mid 50's, Crumb's autobiographical strips appear to have run their course, at least for the moment, and he seems to be consciously shedding the image he has acquired. He no longer sports the trademark blazer and boater, and his moustache has become part of a scratchy white beard. Also, he is vocally happier about having moved from America to Southern France.

Yet traces of the 'Pervert with the Pen' are still in evidence. When asked to pose for our photographs, he complains that they'll look depressing with 'just some old crank' in them and Ciara, EMI's press officer, is roped into appearing too. As the camera clicks away, Crumb becomes more animated, calling Ciara a 'big Oirish lassie' and his hands begin to wander. His reputation seems well deserved.

Coffee Table Art Book has just come out in paperback, published by Bloomsbury.
Crumb the video has been out for years, but is a great introduction.
Robert Crumb's comics are available from all good, seedy and depressing comic shops.
Posted by Elliot at 10:04